Praise the Lord!  The DC Metro area is not divinely snow-cursed after all! : )  What a nice treat it was to wake up early Thursday morning and see 14 beautifully, fluffy, and wonderful inches of snow on my deck.  After ~4 years of dismal, laughable, and downright pitiful “snowfalls” (if you can even call them that) – not to mention countless snow teasers that passed by nary a trace or as cold rain – the DC Metro area (Northern Virginia, western Fairfax in my personal case) finally got a legit, true-blue dump of snow Wednesday night into Thursday.  And though I was getting greedy and hoping for a bit more from Thursday afternoon’s “second round”, a few inches over a foot is totally ok with me any day of the year! 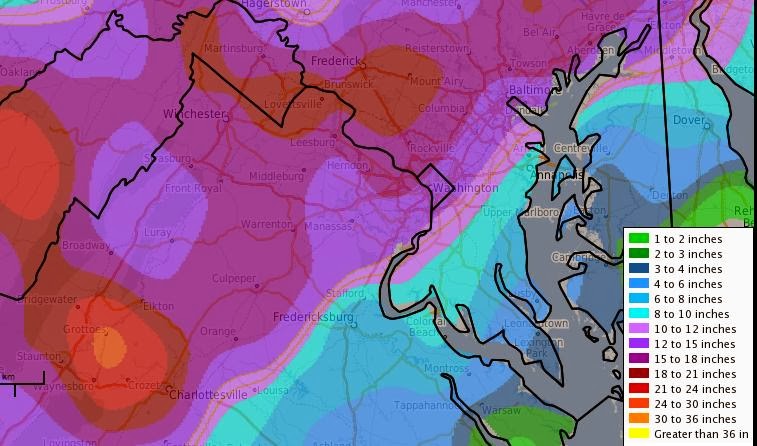 What you see above is the National Weather Service’s (NWS) actual snowfall totals throughout the regions.  Officially Dulles Airport (IAD) received 13.3” and Regan National (DCA) came in at an even 7”.  Boom on my forecast…but very close.  As for my desire to see some more…well God heard my cries and blessed my home with ~14.75”.

Winter Wonderland
I loved the intense snowfall rates that came into our area late Wednesday evening via “deathbands” (energetic “bands” of precipitation that produce up to 1-3” or more of snow accumulation per hour!).  It was beautiful and mesmerizing to watch.

Early Thursday morning revealed some beautiful white, fluffy snow.  This deteriorated a little as the mixed precipitation and rain, as well as rising temperatures, came through in the late morning and early afternoon, but early in the morning it was still all cold and perfect.  Here’s a taste of what it looked like in the morning.
https://www.facebook.com/photo.php?v=10153844815430228&l=5359598617726815280

What I Didn’t Like
I was not a fan of the change-over in precipitation in the late morning and continuing through the afternoon.  Not only did it cut down on potential accumulation totals, but just made things a bit ugly and slushy – not to mention miserable for the kids to be out in.  No kid, or parent for the matter, wants to be out in wet, cold snow.  The sad part is that though a changeover was forecast during this time, it was forecast for mostly parts east of the city.  It was never thought it’d make it as far west as Fairfax County and even Loudoun.

I was also pretty disappointed in the storm’s “Round 2” which was supposed to produce a few more inches for the area in the late afternoon and evening.

The pieces were in place (you can see the “second” part forming in the western Carolinas in the satellite picture above), but it never really packed the knockout punch we were all expecting.  I got about 0.75” out of it…maybe an inch.

Mostly Satisfied
Overall I had a blast with this storm…or at least until the changeover occurred.  A few days leading up to it the forecast models were in disagreement and though we knew we’d get snow, there still was great uncertainty whether it’d be major, moderate, or just another garden variety like we’ve got the past few years.  Thankfully factors shaped up nicely the last 36 hours and we ended getting a “boom” (low probability “upper end" forecast) scenario for the first part of the storm overnight.

Whether it takes another 4 years for a big storm to hit us again remains to be seen.  As for now I’m content though.  That said, when’s the next storm?!  As they say in Philly about their sports teams…”What have you done for us lately?”  -Ebb 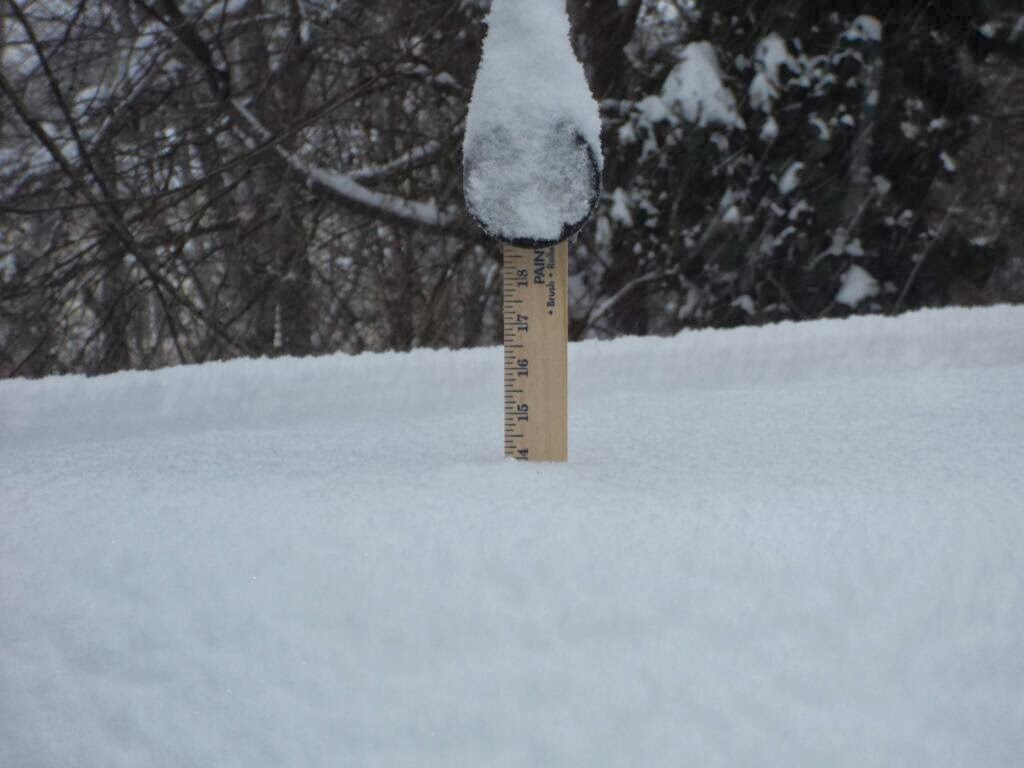