UPDATED: Strange Glow in the Sky...

At the risk of being labeled an alien conspiracy theorist, I’m curious as to what I saw in the western sky yesterday evening.   As I left my office building at about 6:00pm last night, I noticed a strange orange/yellowish glow about 20-25 degrees clockwise of the setting sun.  It most definitely wasn’t the sun and wasn’t a rainbow either (see pics below - click for larger version).

As the horizon cloud cover increased it disappeared but I am at a loss as to what the meteorological event was.  Was it Moon-related?  There was what is called a “Moonbow” occurrence last night (check out ‘Moonbow,’ Hunter’s Moon light up D.C. sky), but it was still plenty light out. 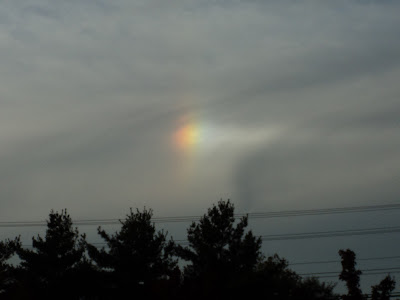 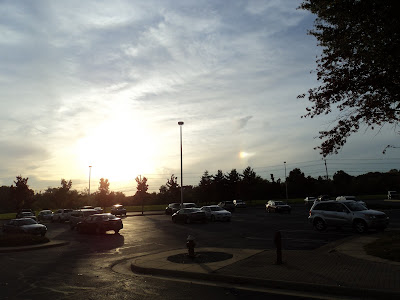 My top three speculations of what caused this are:

Sun-related:
The sun often emits solar flares and other crazy magnetic storms that affect our atmosphere visually occasionally (i.e. Aurora-Borealis effect).  Perhaps this was a solar event that interacted with the atmosphere in a weird sort of way?

Alien-related:
My first thought was the dual sunsets on Tattooine.  Then I began to think about the movie 2001: A Space Odyssey and its sequel 2010: Odyssey Two, starring Roy Schneider, in which the planet Saturn implodes at the end creating a new “sun”…faintly visible from Earth.  Regardless, otherworldly thoughts did enter my mind in trying to reconcile the event.

Religion-related:
My other thought, and one I wished most to be true, was that this was a spiritually related event in which God was making himself known in some tangible, atmospheric way. Perhaps it was even Christ's prophesied Second-Coming.  But I tempered my expectation on that being the case because Matthew 24:27 describes the event more akin to lightening than static orange glows, “For as lightning that comes from the east is visible even in the west, so will be the coming of the Son of Man.”

Whatever the cause, I’m still curious as to what the phenomenon was.  I’ve searched the interwebs for answers, but haven’t really come up with anything concrete yet.    Maybe I’m the next “Bernadette of Lourdes” and I don’t even know it lol.

Well it turns out there what I saw Monday wasn’t unfortunately alien or religious related after all; though the real reason is still kind of cool.  A somewhat rare atmospheric phenomenon called a “sundog”, or parhelion event to be proper, is what I saw.

A sun dog or sundog is an atmospheric phenomenon that creates bright spots of light in the sky, often on a luminous ring or halo on either side of the sun.  Exactly what I saw.

Sundogs may appear as a colored patch of light to the left or right of the sun, 22° distant and at the same distance above the horizon as the sun, and in ice halos. They can be seen anywhere in the world during any season, but they are not always obvious or bright. Sundogs are best seen and are most conspicuous when the sun is low.

When a fellow weather enthusiast mentioned what I saw being a sundog (based on seeing my photos), and I looked up the definition, I knew that described it to a “T”.  I even estimated a 20-25° radial, parallel divergence from the sun itself, which was pretty much on target :)  The only reason I don’t think the sundog looked like the example picture below was that there was low cloud cover on the horizon and my vantage point was low as well; so I did not get the whole picture.  That and I believe the phenomenon is caused by upper-atmosphere water crystal interaction, hence the reason the lower clouds blocked a lot of it. 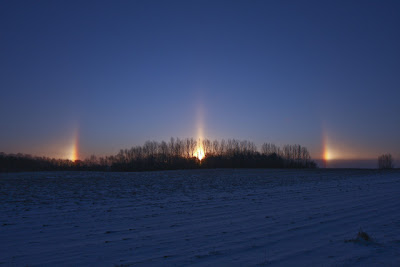 Anyways, I feel much better now knowing what it was.  I was incredulous all Monday evening because I really had no explanation whatsoever, except the wild ones aforementioned in my prior post.  Doing some more research on sundogs reveals some cool history and pictures as well.