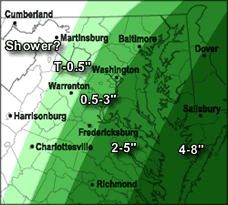 Well, despite the fact I love early snows like in November and even late October possibly, I never thought I’d be posting a DC area accumulation map this early in the season lol. And unless you’re living under a technological rock, you know of a little hurricane named Irene pumping up the Atlantic towards the eastern seaboard. Apart from the wind and storm surge damage, this geographically massive storm is gonna dump a lot of rain on points east of I-95. That said, even west of DC won’t be impervious to the dump. Check out how much rain we’re gonna expect. I heard even reports of up to 10” of rain expected in parts further east. To put that in perspective, a typical rain to snow ratio is about 1:10. So for ever inch of rain, we typically get about 10” of snow. So um yeah…that means if this were a snow hurricane, we’d get up to 50, 60, 70, even 100” of snow! Oh my. 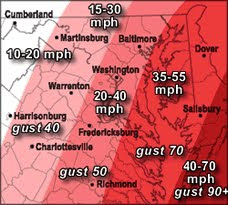